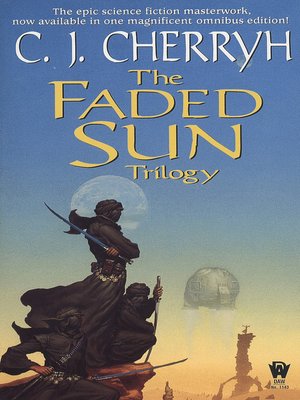 Hello again, my lovely readers. Spring is in full swing, and I have another book review to share. A writing colleague recommended the series The Faded Sun by C. J. Cherryh. It’s a science fantasy three-book series. I’ll keep spoilers to a minimum for any interested readers. 🙂

The Faded Sun series is a sci-fi story with subtle elements of fantasy in the background. Each book is average length—around 250 pages.

If I could explain The Faded Sun in a few words, it would be—sci-fi, desert, and culture. The premise reminded me of Dune by Frank Herbert, with the desert setting, science fiction elements, and how one of the characters becomes indoctrinated into a desert tribe.

While the idea beyond the book didn’t feel completely original, Cherryh put her unique spin on it with the sheer depth and description of alien races and their ethics.

There are two main characters: Niun, a young mri (one of the alien races in the desert worlds) and arrogant desert tribesman, who struggles to find his place among his people; and Duncan, another youthful human soldier, who becomes attached to the mri, eventually joining the desert tribes.

The dialog exchanges between the main characters felt dry at times and difficult to follow. There were a few excellently written spots, of course, which invested me, emotionally in Niun and Duncan.

One of the best facets of The Faded Sun is the relationship between Niun and Duncan, how it evolves over the course of three books. They begin as enemies in book one, distrustful of each other. By book three, they are bonded through kinship as brothers.

The villains were a lawful alien species called regul, who viewed the mri as a threat and wanted to wipe them out. That said, there was no fixed antagonist, rather, it was a faction of regul that changed from book to book. Because of this, I had trouble bonding (as a reader does to a villain) to the antagonist group.

There wasn’t any magical system in The Faded Sun. I honestly felt a little disappointed, as this was listed as a science fantasy book. I suppose you have to expect that in a purer breed of sci-fi. I wrote a guest post on science fantasy and magical systems, if you’d like to check them out.

Again, being a strict sci-fi book, The Faded Sun did not include any romantic elements. Although there was a strong brother-to-brother relationship between Niun and Duncan, which I found to be adorable and well-written.

This is where The Faded Sun shines. Chapters are filled with tension-inducing paragraphs, and Cherryh finds clever ways to challenge her characters; in particular, Duncan’s ordeals when he goes from human to mri are rife with conflict—and an interesting illustration of how adaptive and resilient humans can be.

The relationship between the main characters, the conflict, and the sheer depth of alien culture presented in this book are the best aspects of The Faded Sun. This set the proper tone for a sci-fi trilogy—and it was, in some ways, philosophical.

The dialog exchanges were usually dry, too long, or lacked sufficient emotion from the characters. Other segments of the trilogy felt like filler without much going on—parts that could have been removed or rewritten for better effect. The prose was okay, but I caught a handful of typos—and the pacing was mediocre. The antagonists also felt ambiguous and were hard to “love to hate”.

Parts of The Faded Sun read vaguely similar to Dune, and the side characters lacked sufficient background or emotion for the reader to sympathize. I would have also liked a more unique and fully explained technological system, rather than “generic” or “taken for granted” sci-fi technology.

My rating for the trilogy: 3/5 stars—average

The Faded Sun isn’t anything special, but if you’re a writer or sci-fi geek, you will enjoy the explanation behind the mri and regul culture. It personally gave me some ideas for my own alien races, and how to convey them to the reader. I would recommend this book for that facet alone; just don’t expect amazing dialog or characterization.

Thank you all for reading. Have you read The Faded Sun? I would love to hear your opinion on it in the comments below. Love and gratitude to my readers. 😀

Want to stay in touch with updates? Hit that follow button below. Thanks.

Buy me a green juice.

Donate $5 to buy me green juice so I can keep producing great content!