When you think of a father figure, what comes to mind? Someone tough and brave? Unbeatable? Or perhaps less pleasant thoughts. The father figure can be a very subjective experience. It’s also a useful trope in storytelling. Mothers influence tradition too, in different but substantial ways than fathers. But that’s a post for another time…..

“Daddy issues have a long history of being a part of literature. They seem to be among the most common psychological motivators…“

The Father comes in many types. In the case of the Absentee Father, he’s missing from the plot. The absence creates a hole in the protagonist’s life. A motivator. This drives the hero to grow and expand outside the current environment. Some act as mentors that teach the hero.

Other fathers may act as tyrants that control the protagonist. They often hold the hero back, preventing growth until the hero rises above that control system. Then there’s the villain-father, Darth Vader as the prominent example. This scenario creates a very intimate and interesting relationship between hero and father, especially if dad is the Big Bad.

Revenge of the Father

The death of a father figure is a powerful motivator for protagonists. Oftentimes it evokes emotions of rage, desperation, among other dramatic shifts. How would anyone feel to see a beloved father figure killed? Used wisely, father deaths can be a tool to drive plot and character arcs in the Hero’s Journey.

In Ethereal Seals, Saul Slyhart is the father figure for Pepper—her role model. He is what she desires to become, and through him, the reader can come to understand Pepper’s wishes, doubts, fears, and ordeals.

Saul doesn’t get much spotlight during the story until later books. Then, he serves as an additional mentor for Pepper. At least that’s the outline I have for it so far. Here’s a sketch of Saul I finished recently: 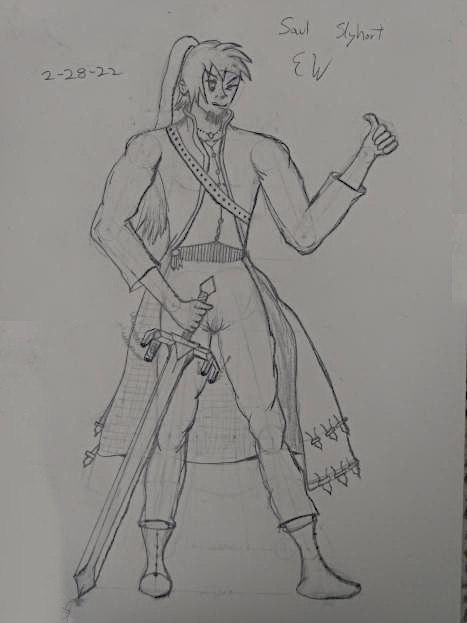 “Ya don’t know what it’s like to live in my pa’s shadow. After what I saw in town, I can’t sit by and watch this happen. These druyds, the sword D’wyrm, and this whole venture; did I make the right decision coming here?” She bowed her head. “Should I have neglected the farm, my family’s estate? A part of me feels ready to jump at the chance of adventure and be more like Pa—a hero.”

—Pepper Slyhart from Blade of Dragons

It’s interesting how a father figure can impact a protagonist’s decisions and goals in the story. Family legacies have always been ingrained in us since the Stone Age. It’s part of who we are, and unavoidable in storytelling. A father can make or break how we grow into adults, or in fiction, how heroes grow and tradition gets passed on.

Buy me a green juice.

Donate $5 to buy me green juice so I can keep producing great content! Or click the donate button below for a custom amount.

Disclaimer: Any health information on this website is not intended to substitute professional health or medical advice or treatment, nor should it be relied upon for the diagnosis, prevention, or treatment of any health issue. Consult with a licensed health care practitioner before making any changes to one's lifestyle. Ethereal Seals will not be held accountable for any medical, financial, or health-related legal implications if enacted.